Ameren Transmission Company of Illinois (ATXI) has filed five different lawsuits against counties in Northeast Missouri which have denied ATXI permission to construct its proposed Mark Twain Transmission Project. Ths development follows the Missouri PSC approval of the 100-mile high power transmission line proposed by ATXI. The PSC found that the transmission line met the legal requirements to obtain approval. However, the PSC placed a major condition on the approval that requires ATXI to obtain assent from the five Missouri counties through which the line will be built. Those are Marion, Shelby, Knox, Adair, and Schuyler Counties. The condition was placed on the line due to a provision in Missouri Law that states that no corporation shall erect poles for the suspension of power wires through, on, under or across the public roads or highways of any county of this state, without first having obtained the assent of the county commission of such county. ATXI argued that the county assent statute did not apply to the type of project that it proposes to build. The transmission line has met with strong local opposition from an organization of impacted landowners and concerned citizens known as "Neighbors United Against Ameren's Power Line."

The PSC Report and Order may be found by clicking on this link.

WHAT is the project?

Ameren Transmission Company of Illinois has proposed to build a 345,000-volt (345kv) transmission line across northeast Missouri from Palmyra to Kirksville and then north to Iowa. Originally, Ameren proposed numerous routes for the project, but in February 2015, announced the "final" route shown on these maps: 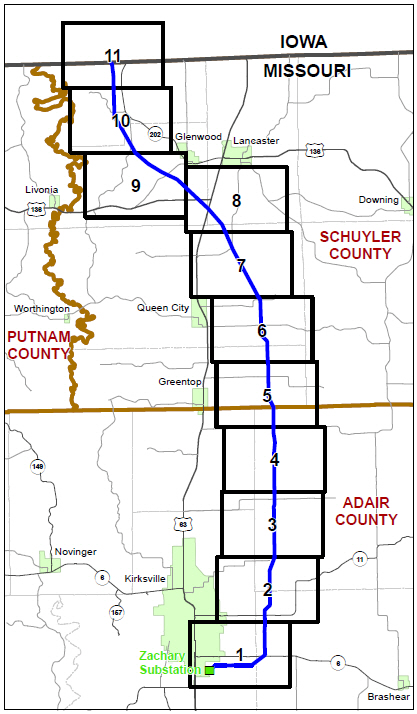 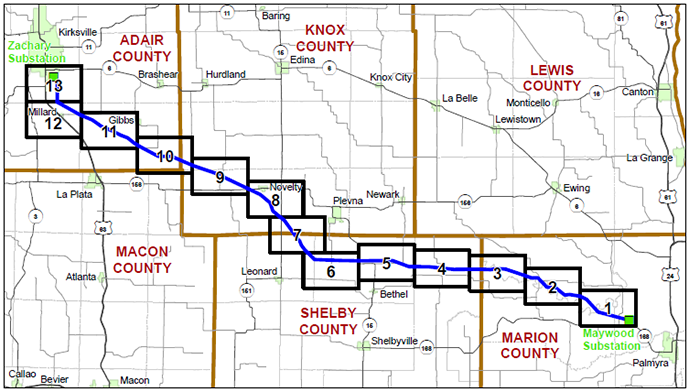 In addition, there is a 2.5 mile 161kv line running to a substation south of Kirksville, Missouri. The route of that line is shown here: 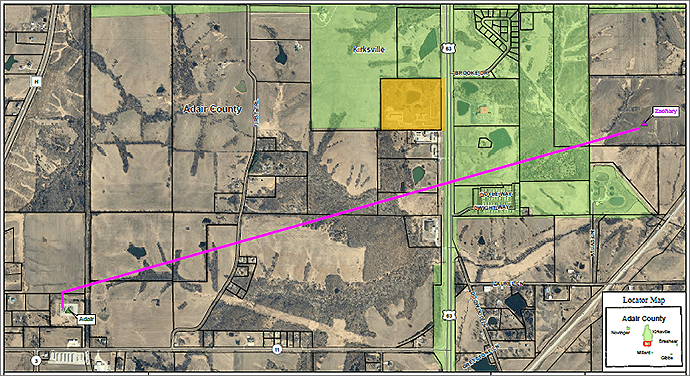 The project will require the use of poles that are up to 130 feet high which will require easements as wide as 150 feet. 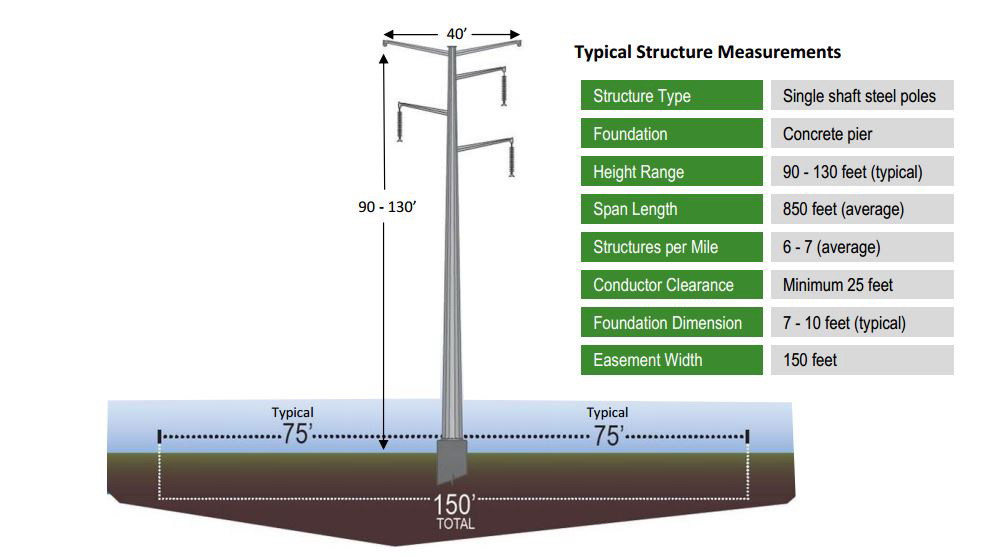 WHEN is this project to be built?

Ameren has established a timeline that the Mark Twain Transmission Line will be constructed by 2018. Ameren conducted public meetings along the route. Ameren has applied to the Missourit Public Service Commission for approval of the project and the route. If Ameren obtains government approval it will start to contact property owners to acquire the easement rights that it needs to build the power lines. That should occur in 2015.

HOW will this project affect me?

If your property is in the path of the Project, then Ameren will need to acquire the right to build the transmission line on your property. In order to do so, it will have to purchase an easement from you. If you cannot agree on the price or terms of the easement, Ameren will have the power to use eminent domain to force the easement on your property. Information on the eminent domain process, including your rights as a property owner can be found HERE on the Denlow & Henry website.

Transmission lines can have drastic impacts on the value of property. When electric companies run unsightly power lines over and through residences, farms and businesses, and place transmission towers on private property, they can destroy aesthetics and interfere with the use of the property by making it more difficult to farm or develop and sell land.

At Denlow & Henry, our attorneys understand the negative effects property lines and transmission towers have on our clients' properties. Over the years, we have successfully helped many Missouri property owners enforce their rights under eminent domain laws and obtain just compensation from electric companies.

What Are My Rights?

Many residential and commercial property owners do not realize they have a right to compensation for the electric lines and towers placed on their properties. If even a portion of your property is used by electric companies for their utilities, you deserve just compensation.

Just compensation includes not only the value of the property lost to electric utilities, but also damage done to the remaining property.

At Denlow & Henry, we have gone up against some of the state's largest electric companies and co-ops, such as the Ameren-UE, Kansas City Power & Light and Sho-Me Electric Co-op. We will fight to get you the compensation you deserve.